Do you remember when we spoke openly about our plans, telling friends and family what we were up to without giving it a thought?

I do. It was before March 23, 2020 and our first lockdown. Before that date, I didn’t consider what I said before I opened my mouth and I had no fear of repercussions.

Then came Monday and I learned to button up.

Before we go any further, I have to say that I did what I was supposed to do because a) I believed it was for the common good, and b) I’m a gutless obeyer of rules.

Like all of us, I learned to go out for exercise, necessary grocery shopping trips – which later turned into highlights of the week – otherwise I stayed at home. There were occasional moments of irritation such as when top scientific adviser Neil Ferguson entertained visitors when he wasn’t supposed to and when rule-maker Dominic Cummings vanished from his home in London later resurfacing in Durham.

However, I was reassured when told DC had not broken the law, simply a recommendation and went back to safeguarding my community by staying indoors. Gradually, my already limited world shrank but I was fairly okay about it. The reality was not that different from my normal, even though I was living in that way through “force” rather than choice.

Lockdown eased, although the confusion continued as it became harder still to understand what were rules and recommendations and what was law. To stay on the right side of the law I, and my friends, mainly stayed in. It was easier that way.

Not so much now. As the latest tier system is put in place and some of us move from tier 1 (rule of six and pubs open until 10pm) to tier 2 (pubs closed, staying home within family group but eating out in restaurants), I am noticing a change in behaviour.

Those friends and acquaintances who were fully compliant during the first lockdown, are now showing signs of rebellion. Outwardly, they still conform but, between friends, they are starting to show a determination to go about their business in a way that does not necessarily comply with the latest orders.

Those outside the tier (I’m not going to glamorise it with a capital T) one areas are happy to welcome visits from friends in another tier. Single friends, who are allowed to have social “bubbles” with other single friends have declared an enlargement of such bubbles. Clandestine relationships have been extended to incorporate not just social bubblers within the same city but have moved further afield to include loved ones from other countries. When challenged, they explain it away, convincing themselves there is a legitimate reason why they are the exception. Sometimes, they are so confident they are in the right, there is no possibility of a challenge.

It’s hard not to sympathise. As many others have said, the rules and regs are difficult to follow and, if our leaders slip up, why shouldn’t we? When we individuals ask questions, they seem to be quickly dismissed by the authorities so we gradually recede further back into our shells and work out what the rules are for ourselves. We may be misinterpreting them but there we go.

Incidentally, it seems that we are not the only ones. Local authorities all over the land are having a great time. Has anyone else noticed how cycle lanes have sprung up in place of where a second lane was? The reasoning behind this – if there is any – is that cycling is a healthy alternative to tubes and buses where Covid may be caught or spread more easily. The argument falls down when Government tells us to take to our cars to keep away from others. More cars, fewer bus lanes and not everyone is either keen or able to cycle or walk to work. But still the sly cycle-isation of our roads creeps on, with no-one preparing to be accountable, or to listen to other views.

Is it surprising, therefore, that we start to interpret the law for ourselves. It seems to be no longer black or white, more an ever-expanding shade of grey. And all this is happening stealthily and secretly. We seem to have gone, within a matter of months, from apparently being an open and straightforward society to one that is closed and watchful. It may be that this suits our nation(s)’ character which is why we have adapted so well. It’s only relatively recently that we were allowed to check up on our governments through the Freedom of Information Act. Even so, it is particular what information is revealed. Try doing an FOI query about the bus lanes and road closures and the local authorities are surprisingly evasive.

I remember a Polish friend telling me of his experiences behind the Iron Curtain when state control was in its prime. He told me he was on a bus, carrying a forbidden book in the inside jacket of his pocket when police boarded. He described his reactions; his fear, his tension, the sound of a rapid and increasingly noisy heart beat as the officials approached. His expression relaxed as he went on to say he was lucky, they weren’t looking out for him that day. I asked him why he had taken such a risk and he shrugged, saying: “It was the way of life, that’s what you did. You learned to cheat the system.”

I’m not sure we have ever needed to cheat the system so we, too, have been lucky. My worry is, if we are kept locked up in this way for too much longer, we will adapt to this increasingly sneaky way of life. I hope not. It’s an unhealthy way to live.

Lulu is an experienced journalist who has worked in print, TV, radio and digital media including Sky News, the BBC World Service and TV-am. In her time, she has been a news, business and health editor and served a brief period as boss of a showbiz desk. As a freelancer, she has written for national magazines and newspapers and has contributed as both writer and editor to a number of books. Lulu retrained as a psychotherapist and counsellor some years ago. She now combines her passions. She currently writes a blog on mental health topics for a Harley Street psychotherapy practice.

Feed the kids - feed the nation

How Boris brought a tier to London’s eye 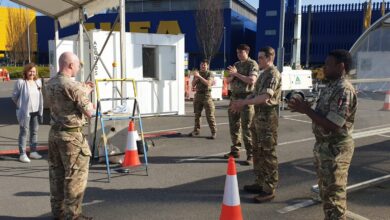 Covid test: An experimental bunny rabbit without the lipstick