This week’s new trend is the solo-cation: a night on your own in a luxury hotel, away from your cohabitees. (Mainly because I did it, but I bet you’d like to, too.)

It was probably more about a change of scene than family-fatigue— just going somewhere that is… different. So I packed up a bag and headed to Pendley Manor in Tring, Hertfordshire, a little swing round the M25.

I drove past the much-recommended Natural History Museum full of stuffed animals that apparently belonged to a Rothschild – next time –  and swooshed up the drive.

The Victorian manor house was indeed splendid, as were the 35 acres, replete with cedar trees and peacocks. But the first thing I noticed on going up the stairs to reception was one of those huge Covid awareness signs, that you see outside GP’s surgeries. 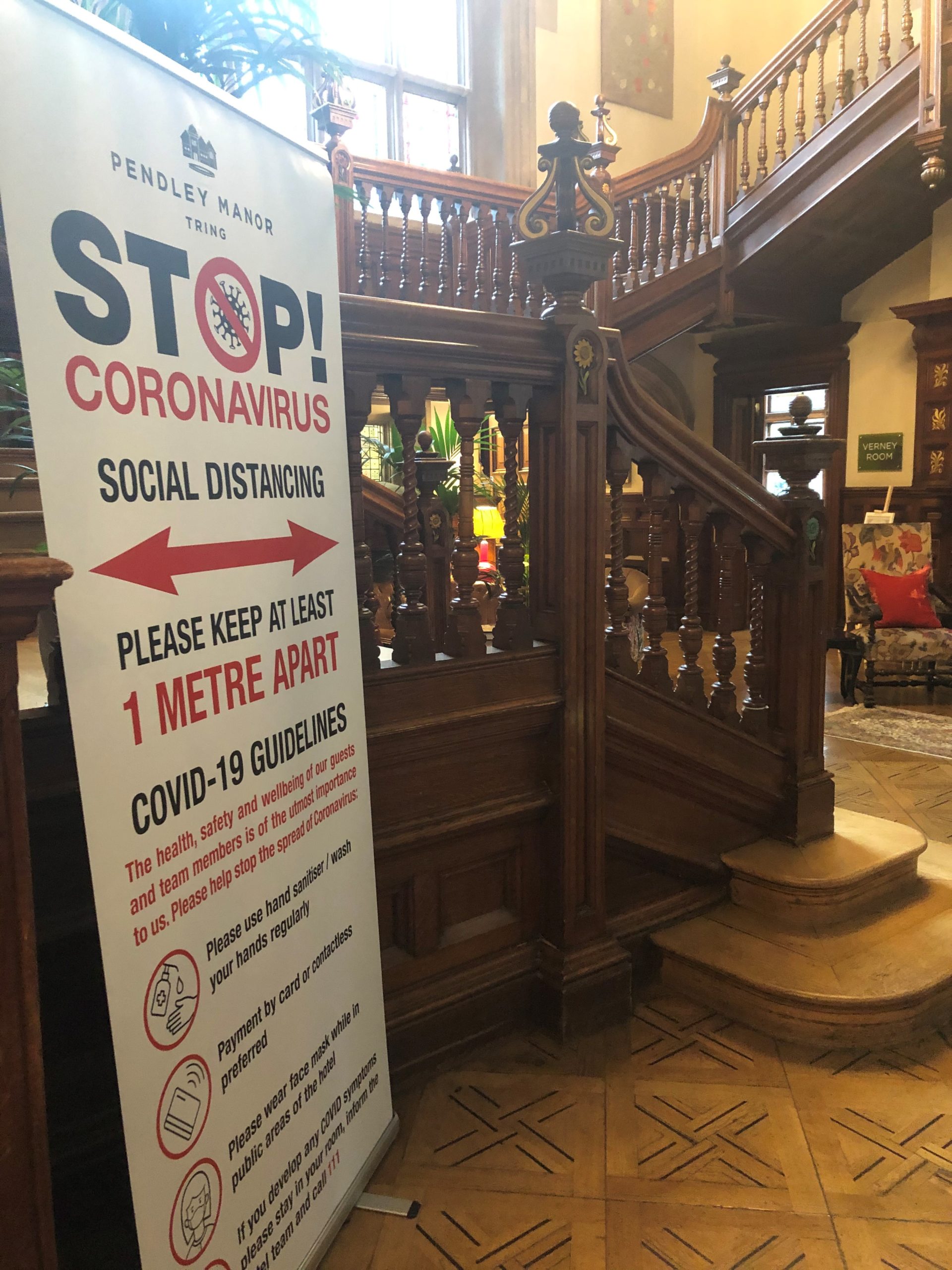 Before booking, I checked that I wouldn’t have to wear a mask in the hotel (I’d rather have stayed home), but the staff were of course masked-up, behind a perspex screen, so it was a bit hard to hear them. I was given my own pen with which to sign the registration, which I would keep for the duration, so as not to spread germs.

Petra the receptionist said that because of the virus, she couldn’t help carry my bags. On the other hand, she was happy to carry my key-card all the way to the room, handing it over at the door. When I queried the logic behind this, she said she didn’t know.

Petra told me I’d have to change for the pool or spa in my room – changers shut because of Covid – and walk down the back stairs. But there was no white towelling dressing gown to hide my modesty, so I wandered down with my costume under my Day Pyjamas, and back the same way.

The bedroom was comfy-cosy, with amazing wallpaper illustrated with lilacs (all the upholstery and curtains in the hotel were beautiful, and unusual). I was greeted by a nice little box of Belgian chocolates – as well a bijou bottle of hand-sanitiser, and some antibacterial wipes. On the writing desk was a long list of instructions, explaining that rooms would only be cleaned every three days, and that we should check out remotely to cut down human interaction.

The Wifi was good: on that, all happiness rests.

Two journalist friends met me in the Shakespeare Bar for pre-dinner drinks. It was all very convivial, even though they ran out of Hendrick’s and only had Gordon’s – ‘because we have just switched to a new supplier’. The spiky-haired Slovenian waiter was flirty and attentive – as we were the only diners in the Oak Room, he was a captive audience.

Dinner was average, really. I’ll be generous, hoping that the usual chef is quarantining after his Spanish holiday, and that the food is usually better.  Breakfast was fine.

I fancied a spa treatment, but the facility was closed that morning. As the hotel only reopened on July 17, however, and is still getting back up to speed, I’ll let that one go.

The staff kindly allowed me to check out at midday – though I have to say, I only saw one other overnight guest, so the room was possibly not booked out the next night.  Regardless, this allowed me a swim and a leisurely latte before the industrial cleaners moved in.

So, it’s ok to punch women who have opinions?