In his speech at Saturday’s anti-lockdown protest in London, David Icke called for “Nuremberg trials” for the “fascists” who are enforcing us to wear masks...

That’ll be the same David Icke who has accused Jews of planning the pandemic and who has also suggested that Hitler was Jewish and a Zionist. Predictably, the former sports presenter is also a Holocaust denier and so, equally predictably, he trolls Jews at any opportunity: there’s a reason he cited the Nuremberg trials and not The Hague at the rally.

But you probably don’t need any introduction to the conspiracy theorist.  A recent poll showed that 51% of Britons have heard of him, and one in eight have read his books or seen his videos. And since the outbreak, millions more have watched him explain how the Rothschilds, George Soros and Bill Gates are locked in a sinister, secret alliance.  When people feel powerless and unsafe, conspiracy theories often appeal more than the truth. More psychologically satisfying.

And where there is conspiracy theory, there is invariably antisemitism. Contemporary antisemitism is rarely expressed as a racial or social dislike of Jews. You can no longer say Jews are inherently  abhorrent or that you don’t like our culture or religion. Not in public, anyway.  So, instead, it’s Jews have too much influence and wealth, and use it in covert concert to manipulate governments, banks and media organisations for our sordid purposes.

Over the past five months I have heard acquaintances say Israel is using the pandemic to “test its technology” and people I’ve known since my school days argue that 5G networks are making us vulnerable to the virus’s ravages. Friends have sent me links to articles claiming the virus is a bioweapon engineered in a Chinese lab, and Facebook pals have intimated I’m naive if I don’t understand how the pharmaceutical industry benefits stands to benefit from the pandemic.

Some conspiracies are easy to debunk. There’s plenty of evidence to prove the world isn’t flat (hello Linda, in Melbourne). But there are laboratory accidents, and it is an unhelpful coincidence that the Wuhan Institute of Virology is located in the city where the outbreak was first detected. And while it takes a lot of research to prove something is not true, to provide and marshal actual facts, it takes very little effort to spread misinformation on social media. In this sense, conspiracy theories are a bit like viruses – they are forever doing the rounds.

And one conspiracy theory that has been doing the rounds for a very long time is of the Jew as deceitful puppeteer, the shadowy figure who poisons wells in the dead of night, who kidnaps Christian children from their beds because their blood is especially coveted for the baking of matzos.

Does it need stating that everything bad that people have ever thought about Jews coalesces in what they now think about Israel, the country at the centre of so many of these mad Covid conspiracy theories? Those spreading the smears somehow ignore how it is making such a bungle of its own Covid strategy, crediting  the world’s sole Jewish country, a sliver of land no bigger than Wales, with evil powers that almost stray into the supernatural.

Ah, the supernatural. I’m going to upset some when I say it’s a scarily short step from crystal-hugging to antisemitism. The pandemic has brought the tin foil hat brigade out in force – the anti-vaxxers, the anti-maskers and the anti-5Gers. They are getting louder and more brazen by the day. Since the outbreak, there have been more than half a dozen anti-lockdown protests within these shores alone. And in my experience, the protestors have two things in common: an over reliance on meditation and a lack of critical thinking.

“Is it possible that the virus was secretly manufactured by the US and Israel to target their mutual rivals China and Iran?” asked a yoga teacher and occasional drinker at my local. I won’t be blowing the froth off a couple with him again, but the problem is views like his are gaining traction.

And they are even infiltrating universities, our supposed centres of defence against irrational thought and unempirical dogma. A friend introduced me to a word the other today: crankademics.  It originated in the run-up to the last general election to describe the alarming number of academics who drank from the fountain of Corbyn cult-a-cola.

A new Twitter page University Antisemitism Map now tracks these antisemitic academics. But it’s also a fitting description for the likes of Professor Sunny Singh who said on her Twitter feed that she never accepts invitations to debate because: “debate is an imperialist capital white supremacist cis heteropatriarchal technique that transforms a potential exchange of knowledge into a tool of exclusion and oppression.”

Scary, huh? As scary as the loud cheers Icke received on Saturday when he referred to our government  – which I have never been shy about criticising – as fascists. 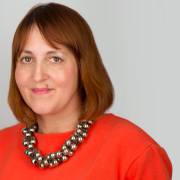 Karen Glaser is a freelance journalist, writing for national newspapers and magazines on a wide range of subjects including education, architecture, parenting and Jewish affairs.

Is the world ready for Spitting Image 2020?